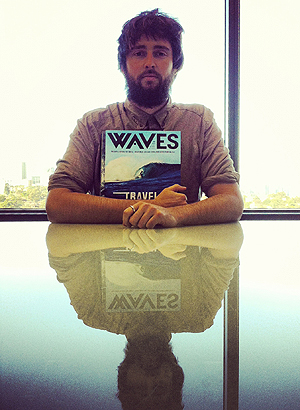 nextmedia – publishers of Waves surfing magazine, wavesmag.com.au and the Waves iPad application – have announced the appointment of Danny Johnson as Editor. Danny has a long history in the surf and fashion industries and has been with Waves magazine for the last 12 months.

Waves, renowned for decades as being close to the pulse with surfing’s evolving culture and heralded as the voice for the new generation, with irreverent content and focus on hi-fi surfing will answer the call from a growing audience of digital savvy surfers. Danny has led the successful launch of the Waves iPad application and has a terrific sense of the interests of the young surfer in the new digital world. Danny will be well supported by Ben Whitmore as Deputy Editor and a world class list of writers and photographers including Peter “Bosko” Boskovic, Nate Smith , Kirk Owers and Richie Lovett to name a few.

Waves magazine will also be published in a new larger perfect bound format from next issue to showcase not only the best in surf images but the latest in fashion and product for the industry.

Marcus Hucker, General Manager of Boardsports titles at Next said “The Waves’ audience has totally embraced the new magazine and digital strategy and Danny’s appointment will take it to the next level”

Ethan Smith is leaving Waves after a stellar 6 years on the title and a significant contribution to the magazines growth and development. We wish Ethan well in his new endeavours.

Next Media is also the publisher of Tracks – The Surfers Bible, tracksmag.com, The Official ASP Guide and over 30 other specialist titles that help excite readers about their passions.